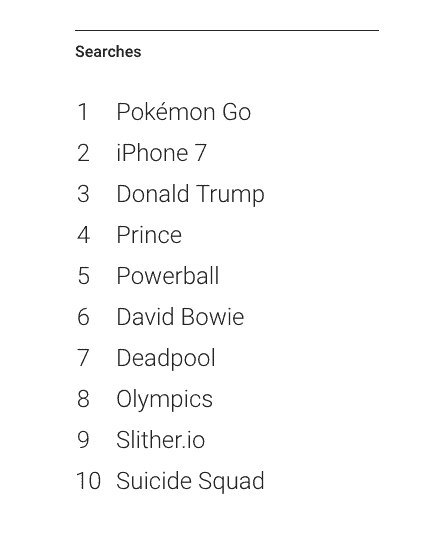 We don’t need to tell you that 2016 has been a bit of a year; Brexit, Bowie, Rickman and the hottest year since records began are just the tip of the melting 2016 iceberg, and Google has been on the front-line for all of that news giving.

The search engine has released its most popular search terms throughout the year, as well as nine global search trend lists which rank everything from people to events.

Overall, the most searched terms on Google in 2016 have been Pokemon Go, iPhone 7 and Donald Trump. On April 21st, Prince bumped into the top five of people searched for in 2016 after his sudden death and the US Election was the world’s most Google’d event throughout the past 12 months.

The top 10 search terms for the whole of 2016 cover a range of events, people and technology trends.

The Olympics, Brexit and the outbreak of Zika all came in as some of the most searched global events of 2016, as did the Panama Papers scandal and Nice attacks. 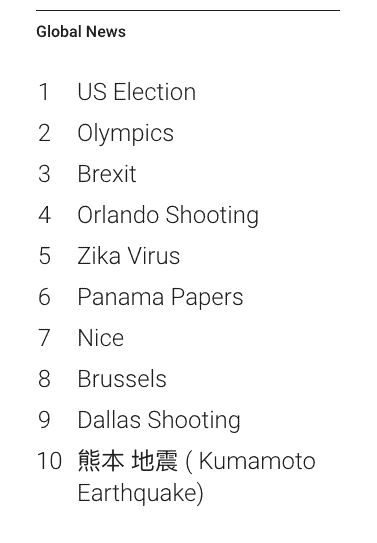 Here’s how to set it up and turn any TV with an HDMI port into a smart TV – how to set up Chromecast. Download the Chromecast app on your Android or iOS mobile device or laptop at www.google.com/chromecast/setup. The app will walk you through how to connect your Chromecast Setup Androidto your Wi-Fi network.which enables its user to cast the Chromecast Setup device on bigger screens as per the suitability of the user.

Both Donald Trump and Hillary Clinton came out in the top 3 of most searched people on Google in 2016, with Bernie Sanders and three Olympic Athletes all being searched for across the world. 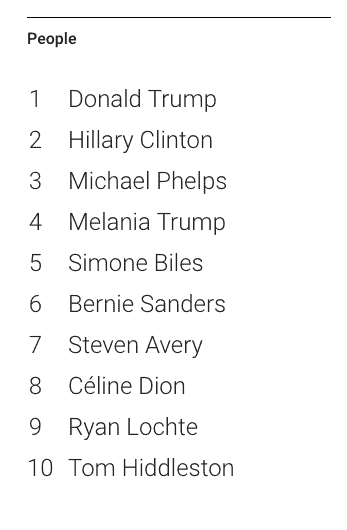 You can explore Google’s top search trend lists here, as well as making it possible for users to track events and individual search terms to see how they trended throughout the year.